Name: Spottednight
Age (moons): 17 moons
Clan: Mysteryclan
Rank: Elder
Gender: She-cat
Appearance: A young, pretty cream-colored she-cat with long fur. She has black spots decorating her fur. Her eyes are a dark green color. Her left ear is nicked from a previous battle. Her hind leg is twisted, resulting in poor transportation.
Personality: Friendly, and gentle towards younger cats. She becomes very quiet when she sees her clanmates returning to camp with prey. She longs to run through the woods again, and becomes very stiff when she thinks about it. Other than this, she tries her best to help the clan despite her poor leg.
History (optional): In a previous battle, she tripped while a cat had a firm grip on her hind leg. This resulted in the permanet damaging on her bone. 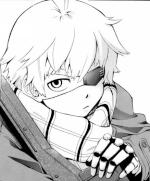